Want to know the meaning of Wick’s shoulders tattoo and why it is tattooed?

Have you ever noticed the tattoo of Keanu’s Shoulders shown in John Wick: Chapter 3 movie, and do you ever think What is Tattooed on John Wick’s Shoulders? and what it means?.

Notice but don’t know the meaning? So don’t worry because I’m going to tell you what it means and why it’s tattooed on the shoulder.

On John Wick’s shoulders, he tattooed Fortes Fortuna Aduivat which is a Latin phrase and the meaning of this phrase is that “It is only the strong ones that Fortuna (The Goddess) comes to save”.

Before explaining the meaning of the tattoos let me tell you how many tattoo John Wick have on his shoulder.

According to John Wick: Chapter 3 film John Wick has five tattoos on his shoulder the famous one is “FORTIS FORTUNA ADIUVAT” on the top of his shoulder.

You can see all the meanings of John Wick’s Shoulders Tattoo below:

Fortis is a Latin word that means “Strong” in English. This statement is used as the motto for the 3rd Battalion Marines stationed at the Marine Corps Base in Kaneohe Bay, Hawaii.

Fortuna represents Wealth, Strength, or Good luck. A spiritual power that can only be as bad as good. She is the goddess of luck and fortune. An example of Fortuna is the fate of the discovery of oil on an otherwise useless piece of land.

In Adiuvat, In Latin AD means ‘to/toward’ and IUVAT means ‘help/aid/save. particularly of a goddess, ‘comes to save, comes to the aid of’ is the best choice here.

Those praying hands tattoo on John wick’s back has an origin from the masterpiece of German Renaissance painter Albrecht Durer.

According to the fans of the movie. The praying hands on his back may indicate his loyalty to the Russian family for whom he worked.

Some believe that this tattoo represents Christian prayer (asking God for forgiveness), other than praying that others are opposed to the pagan god of fortune.

The opinions are divided and there is no definitive answer to the real meaning of this tattoo.

The small part of the tattoo is struck with a scar (and it is unknown what kind of scar it is).

Contrary to many discussions on the internet, the scar isn’t really “crossing out” the cross and does not have antichristian meaning. With their tattoo, the wick can be perceived as an avenging here,

But, not a dark man he is a loving husband, driven to rage by the cruelty of evil men taking his wife’s last gift from him. We can agree that wick’s strength comes from his faith that helps him to fight evil.

Who wrote Fortune Favours the Bold?

Fortune Favours the Bold written by the Roman poet Virgil. The phrase is basically a Latin proverb made famous by Virgil, who authored the Aeneid among other famous mythological texts.

He quoted it, “Audentes Fortuna Iuvat” It translated quite literally, to the daring fortune does bring aid.

The meaning of Fortes Fortuna Aduivat is: “It is only the strong ones that Fortuna (The Goddess) comes to save.”

As you know in the movie John Wick: Chapter 3 Keanu Reeves has a tattoo on his shoulder “Fortis Fortuna Adiuvat”. In English which means “Fortune Favours the Bold” The way I see it, this proverb means that fortune or luck will come to those who are willing to be bold.

We hope this article helped you to find out this meaning of What is Tattooed on John Wick’s Shoulders. You may also want to know 5 Best Temporary Ink Tattoos that last 6 Months or Why do Females get Tongue Piercings? (4 Reason). 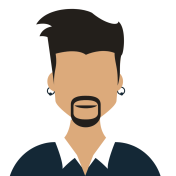 I worked for a tattoo and piercing shop for five years, now I own a shop in Las Vegas. In my spare time, I love writing blogs that you can read at Piercingarts.com.